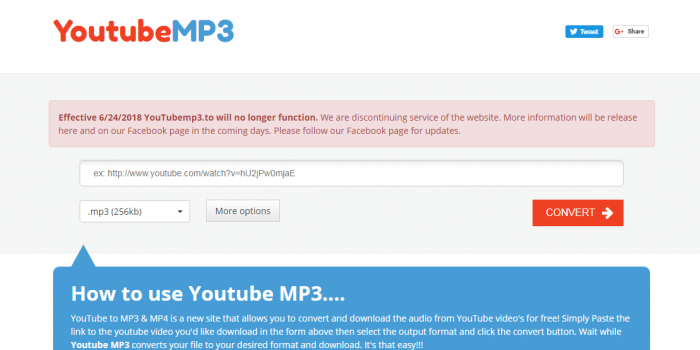 One more great and freshly popular youtube to ytmp3 converter site is closing down. It’s our well known and beloved youtubemp3.to, which has been google’s goto site for “youtube mp3” keyword and many others.. It’s going to be a big loss!! Here’s what their front page says now:

You can see the message indicates site stopped working about 3 weeks ago. It is still online though.. Why? to continue making money! The site is in top 2000 world’s most visited sites, with a possible easy 300-500k daily visitors. With that much traffic, daily earnings from popups will be counted in thousands..

this article continues series of “Youtube converter sites shutting down”… Started with youtube-mp3.org going down, then it was listentoyoutube missing, then keepvid stopped working, and just recently PickVideo.net stopped working.. and i am probably missing a few others in this recount here..

It is funny, really.. Site doesn’t work, but still makes its owner $2-3k per day… hehe.. I’d like one of those, please! Youtube downloader scene is weird… Sites come and go.. Some are making their money for years, some can only go for a few months, before success swallows them.. I mean, their success calls for some cease and desist order, which usually makes owner close the site..

But as I said, i did go in and enter the URL and see the next page announce same thing – no more working! but during this process i closed 4 different popups. that is a lot! site’s owner is actually trying to rape visitors as much as possible.. via popups..

Site had its quirks.. at some point it was using coinhive’s script to have users mine for cryptocurrency called Monero.. not a nice way to make money, but maybe it didn’;t make anything. plus crypto conversion rate is never a sure thing to rely on, so.. popups.. heh..

well, if you were one of the devoted users of youtubemp3.to, here are a few alternatives that should replace this site for you..