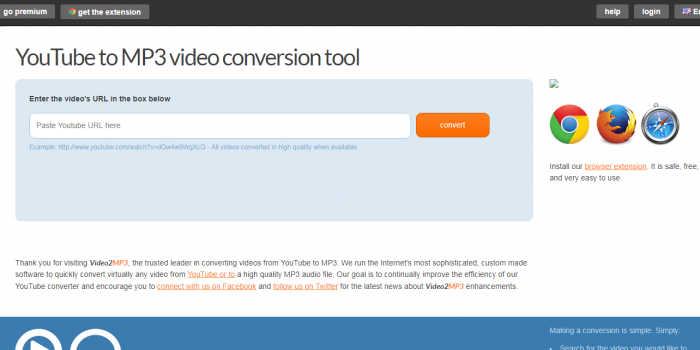 Video2Mp3 is a search keyword closely related to whole topic of savetube – downloading and saving online video and converting it to mp3. In this case, probably, just converting. Nevertheless, this is promising an interesting excurse into the wayback machine…  Nice!! I like digging through old sites…

So.. The idea of this article is the research into keyword “video2mp3” and speculations on the topic of what’s up with the sites that “own” this keyword… In my opinion, this should be a very competitive keyword, with sites like theyoump3, ytmp3 and flvto fighting for it.

Let’s start with the obvious choice – video2mp3.com. At first it was a website about ipod video, then later became a site that advertised for software to convert youtube to mp3, even had VDownloader link at some point.. below is a screenshot of the page header from 2012.. just for informational purposes… This site existed from 2007 to 2016, then seems to have changed owner and turned into some blog looking site with no purpose…

this one is actually the reason for this article. At the moment it has Alexa raiting of 150k and shows default nginx page. It also seems that this has been the situation with this site since mid 2015 (for the past 2 years). Site was originally created in 2009, changed its look 3-4 times till 2015, when it finally went under. At its peak popularity i am sure it was one of the top youtube mp3 converters.

Below is the screenshot of the last available video2mp3.net working version (in 2015). check it out, it was a great site.. None of the sites below that exist now does anything near this one. Before video2mp3.net had to disappear (or break down) – it was scratching top 4k sites. Back then it was quite easy to get in there with a site with functionality such as this one.

the site looked pretty nice and much likely has been the competition for offliberty, savefrom and keepvid, that have existed alongside this site for all these years.

now for the remaining 2 sites that are out there.. video2mp3.de is the first one, exists since 2008 untouched by authorities. Boasts high speed downloads without captcha, only i do not get it, why mention captcha? it hasn’t been an issue in many years.. below is a screenshot of what video2mp3.de looks like now..

the other one of the 2, exists in its current shape since 2013, although came to be much earlier and was dropped and bought by scalpers, who ran their ridiculous advertising there.. now isn’t a popular service, much like .de version in this relation.. Below is the screenshot of what the site looks like at the moment..

video2mp3 is a good keyword for youtube to mp3 conversion, only it’s represented with kinda meager sites with murky backgrounds.. with video2mp3.net (main player of the 4) and video2mp3.com gone, the remaining 2 .de and .org really under-represent the possibilities. Maybe it’s the right time to take control of that situation? Cut a piece of the y2mate’s pie?